WeAre1: A Family of the Unwanted 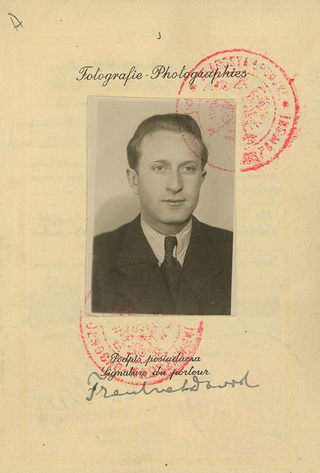 WeAre1: A Family of the Unwanted

Eighty years ago this month, the St. Louis languished in the port of Havana with 937 German-Jewish refugees aboard. After Cuban officials refused them entry, American Jewish organizations negotiated in vain for asylum. Ultimately, the ship returned to Europe. Its human "cargo" dispersed to England, the Netherlands, and Belgium. The Jews' lives were again endangered a year later when Nazi Germany occupied the countries on the Continent.

In the 1980s, historians at the United States Holocaust Memorial Museum researched the fates of the St. Louis passengers. Half survived; they either hid, or secretly and illegally fled to the United States or then Palestine. The others were murdered.

The St. Louis was yesteryear's Caravan. The ship and the forsaken Jewish refugees became a symbol of callous indifference to the plights of the displaced just as are today's Latin American asylum-seekers and the world's 68 million refugees.

It is especially horrifying that on the eve of this remembrance, President Trump is reinstating his inhumane and illegal policy of denying asylum and tearing apart migrant families. "Our country is full, our area's full, the sector is full. We can't take you anymore, I'm sorry, can't happen. So turn around," he said on April 5. Full? What does that mean? Turn around–again?

I have a personal connection to the St. Louis crisis through a little-known, small French ship that also steamed into Havana harbor that late May 1939, having spirited 104 Jewish refugees from Central and Eastern Europe trying to escape Hitler and 327 Spaniards fleeing Franco. I know of that French liner because my father, David A. Frenkel, MD, was on it.

My father left Poland on March 18, a day after his 26th birthday. He was newlywed, having married an American tourist named Rose, who already had departed for New York City. My father traversed Germany and Belgium by rail to France and lingered there until he bought a "landing visa" from a Cuban official and booked a berth. Le Flandre sailed from St. Nazaire on May 16 andstopped in Havana on May 28 en routeto Veracruz, Mexico.

I imagine my father leaning over the deck rails, elated to be so close to the United States mainland and to freedom. Further in the harbor, he would have been puzzled by the St. Louis at anchor and encircled by a flotilla of rowboats. I can only surmise this because my father refused to discuss how he got here. What he had to do to save himself was so humiliating and dangerous that he chose to spare my sisters and me. Until he died, we knew nothing of his marriage of convenience and harrowing voyage to freedom. Then we learned the barest outline from our mother and our father's brother. I ferreted out some details from his 1939 passport and several archives.

When Flandre docked, the Jewish refugees were not permitted to disembark. By then, my father would have heard that the rowboats bobbing around the St. Louis were filled with relatives clamoring for their loved ones to be freed.
On the dock, among 2,000 relatives and press, stood Rose, according to a June 9 story in the Austin American-Statesman. She asked an immigration official, "Why? Why can't he land? His papers are all in order." The immigration official shook his head and replied, "He's a Jew." "Yes, he committed a crime the minute he was born," Rose responded. Then she changed her approach and pleaded with the bureaucrat. "Won't you let me speak to him for just a minute? We haven't seen each other for such a long time." The official gruffly motioned her up the gangplank where she and my dad met halfway. There was time for a hurried kiss.

The reporter wrote that this was one of many scenes of people split apart. Sounds a bit like our DACA "Dreamers" and Caravan parents and their kids, doesn't it?

I suppose my ever-optimistic father said he would see what happened in Mexico, for which he had no visa. But that is how I like to think of my father. In truth, I cannot bear to contemplate how he really felt, displaced and abandoned.

When Flandre arrived in Veracruz, the Spaniards disembarked, but Jewish refugees were unwelcome. An unexpected commotion irrupted on the quay––a medical emergency. True to the Hippocratic Oath he had sworn at the Medical School of Vienna one year earlier, my father treated whoever was ailing. Then he must have convinced officials that he would not be a burden on the state because his American wife was arranging for his visa. He offered to work for free in a hospital until his visa came through. That's when they probably stamped his passport "Turista" and had his valises transferred to the dock.

Flandre returned to Havana where, again, no Jews were permitted on land. The passengers cabled President Roosevelt requesting that he intervene. He did not. Even though the Jewish Joint Distribution Committee raised $500 per Jew, the Cubans still refused the money. Six or seven Jews were allowed to disembark. Flandre sailed back to France where the government interned her 96 passengers. Their fates remain unknown.

You would not know by my complexion and last name that I am the daughter of a man who married to save himself and that by a fluke he was not forced to return to Europe. Could you have guessed that my father's first wife had a lover who was a gangster and that she expected her greenhorn husband to be her cover? Talk about criminal elements invading our turf. While adjusting to his new country, my dad extricated himself without arousing the suspicions of Immigration Services from a union that could have entangled him with New York's gangland. Then he enlisted in the Army and treated American soldiers in the European Theatre.

What happened to my parents did not occur long ago. In the human psyche, traumatic events are timeless and impact entire families. Certainly my parents' worldviews were permanently affected by their wartime experiences. They would not have recognized their haven today. They would have been appalled at the cruel actions of the Trump Administration and felt that it demeans us. Because they suffered from the world's unresponsiveness to their persecution, they raised my sisters and me to be empathic. We champion solidarity with the displaced and all victims of war because we understand their suffering.

We have a history here of immigrants from all walks of life and places who have contributed vastly to our society. The assumption that Central Americans will not is bigoted and all about satisfying Trump's base­­––those "fine people" whose chant at Charlottesville, "Jews will not replace us," threatened the rest of us.

The consequences of war and indifference last for generations, whether due to Anti-Semitism in 1939, or now from both the Left and the Right, or systemic racism affecting people of color. We must recognize and prevent the suffering of asylum seekers. The trauma inflicted by wrenching apart Caravan families, of a young Somali girl surviving in a Kenyan refugee camp, of slavery and Jim Crow, of the losses European Jews suffered during World War II, must not be diminished. We are one—a family of the displaced. There is no hierarchy of suffering, just timeless trauma. It is universal and immeasurable. The amygdala may or may not recover from the imprint of violence and prejudice singed into that part of the brain. And we all have amygdalae, just as our blood bleeds red.

On the 60th anniversary of the St. Louis crisis, the situation of the Jewish passengers was likened to the victims of the conflict in Kosovo in then Yugoslavia. If we cannot resuscitate tolerance and empathy, yet another group of refugees will be referenced upon the centennial of the St. Louis and Le Flandre, and on and on through the ages.

This trenchant story is vividly recalled - sepia tones and bent corners imbuing the imagery as the historical era and weight suggest. In an instant, though, one is reminded of our present and how it echoes so harshly in full, blinding color.

Beautifully stated. Hope it gets beyond the choir.

I have so been enjoying your blog. I read this morning about your dad and mom and their harrowing experience. Of note to me is how little your father spoke of his ordeal, even years later. I find the same to be true of my parents who speak very little of their experience during that time as children in Poland. The sad part of all of this is that, as you noted, today, we humans still fail to DO the right thing. I often asked by grandmother, who was part of the Polish Resistance Movement, why she did what she did given the situation in Poland at the time. Her response to me(in Polish) was direct, clear and to the point:

Waldek, one day you will find yourself facing a situation/crisis that has nothing to do with you, but everything to do with mankind. She said that if she stood by and watched her friends being corralled and forced on trains to meet their end, and did nothing, she might as well have put them on that train herself. For if I would have done that, I would have only been thinking of myself and not what this all meant to "WE", the people of the world. So, when a time like this crosses your path in life, do what is right for ALL not just you, regardless of the consequences.

Thanks for sharing such a powerful and wonderful story of some very courageous people.