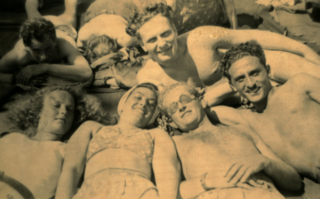 On July 26 seventy-four years ago, my mother, Irena Goldberger, arrived in New York Harbor aboard the Liberty ship SS Marine Perch. She had been at sea for a week. It had been 2,519 days since she had fled Kraków as a fourteen-year-old on September 3, 1939, 1,676 nights since she had left her parents in Lwów, on their insistence, on December 24, 1941. She never saw them again. Her six-and-a-half-year journey was about to end, although her odyssey meant she could never return home, that she would have to make a new one. She had come of age as she conquered obstacles along her wartime path. Now the New York skyline beckoned.

The Marine Perch was one of the first ships to ferry Holocaust survivors to the United States. My mother was a passenger because even though she was raised in Kraków she had been born in Berlin. There were fewer displaced German-born Jews than Polish Jews trying to come here. Marine Perch was filled with displaced persons––mostly young, single Jewish survivors like my twenty-one-year-old mother. Of the 545 Jews aboard, almost half had received support from the Joint Distribution Committee. The agency had aided them by handling immigration papers, arranging transportation, and paying for or advancing travel costs from a United Jewish Appeal $100 million fund (about $1.4 billion today). Another 275 passengers were American citizens, mostly re-patriates.

The ship was sparsely outfitted––no piano, no movie projector and no library, so the passengers had little to do but hang about, gossip, and sunbathe. My mother heard that one of the re-patriates, a nineteen-year-old who had been visiting her aunt in Bremerhaven, had spent fourteen years in German concentration camps and was on her way home to reunite with her mother. There were sixty-five Jewish orphans, including six siblings, the children of a Polish couple. Their mother had died of starvation and their father had succumbed to tuberculosis in a slave labor camp. My mother had heard many stories while working for the U. S. Army after Liberation, but these were exceptionally sad. Little children. At least she had been a teenager.

When I was a teenager, my mother read to me Percy Bysshe Shelley's sonnet, Ozymandias, which depicts the ruins of a tyrannical pharaoh's statue:

I met a traveler from an antique land
Who said: "Two vast and trunkless legs of stone
Stand in the desert. Near them on the sand,
Half sunk a shattered visage lies, whose frown
And wrinkled lip and sneer of cold command
Tell that its sculptor well those passions read
Which yet survive, stamped on these lifeless things,
The hand that mocked them and the heart that fed.
And on the pedestal these words appear:
'My name is Ozymandias, King of Kings:
Look on my works, ye mighty, and despair!'
Nothing beside remains.
Round the decay of that colossal wreck, boundless and bare
The lone and level sands stretch far away.

Such an arrogant boast, "Look on my works…and despair." My mother did not, and I am certain these words comforted her during the darkest moments of her slave laborer years pretending to be a Catholic Pole in Germany. She toiled to save her life. After she read, "Nothing beside remains," my mother turned to me and exclaimed, "Isn't Shelley marvelous?" She felt certain that just as Ozymandias' empire and his monuments had been demolished, so too would be the scourge of Nazism. She taught me that imposing murderous ideology on the world would lose the test of time.

That poem's message, and my mother's post-war certainty may be undeserved. Today, Trump's secret police threaten peaceful protestors against police brutality and racism. Tim Snyder, the Yale historian and author of On Tyranny: Twenty Lessons from the Twentieth Century and The Road to Unfreedom, said on July 24 that the unidentified, unaccountable Federal enforcers in Portland, OR, are a test for the November presidential election. He expects them to menace voters at the polls.

Yesterday, photographs were published of a naked woman facing a line of armed and armored intruders. Pepper balls exploded at her feet and clouds of tear gas mushroomed around her. She never flinched while resisting. Instead, this voluntarily vulnerable, light-skinned woman of color dubbed "Naked Athena," faced down the aggressors. She got into "good trouble," in the words of the late John Lewis.

The poem, the statue in New York harbor called Liberty Enlightening the World, the Oregonian woman's nickname––all suggest nominally and through imagery that the fight against prejudice has persisted since ancient times.

Next week, the Trump administration is expected to deploy hundreds of federal agents to Chicago. Trump has also ordered these so-called federal officers to Milwaukee, which will host the scaled-back, mostly virtual Democratic National Convention. There, as in Portland, they are to "detain protestors," a polite way of saying they will be grabbed off the streets and held against their will, in violation of their civil rights.

Anything could happen. Portland detainees were charged with failing to comply with a lawful order and released, but what's next? Will protestors in other cities disappear?

My mother was not naïve and she knew Nazis were allowed to enter the United States. She even encountered a Ukrainian collaborator during her voyage here. While in Poland and Germany, she, too, resisted authoritarians who could have shot her. I hope you will be able to read more about that in HOW FAR, my account of my parents' wartime experiences.

To ensure that their daughters grew up in a diverse educational environment, my parents sent my sisters and me to the United Nations International School. There, our classmates were the sons and daughters of diplomats, employees of the U. N. Secretariat, and American-born students. We were taught history by a Yoruba from Nigeria, physics by a Polish aristocrat, chemistry by a Hungarian and a Yorkshireman, Latin by an Irishman, biology by an Indian, calculus by an Englishman, French by an Algerian, and on and on. Anyone who made a racial slur was expelled.

Sun-bathing on the deck of the Marine Perch, or gazing at our patinaed colossus as her liberty ship sailed by, my mother could never have imagined an American president unleashing secret police to attack fellow citizens the way they did this past week, the anniversary of her voyage to freedom.

Your evocative words tell a moving story that is beautifully written. Thank you for sharing & reminding us of the dangers & detours along the path of democracy & humanity, too.

Well said and inspiring us to reflection and action as always!

Such a powerful and timely piece. Very well-done! What a horrific nightmare we are all living through...Many thanks for sharing.
Here's hoping November will shine a light at the end of this very dark tunnel.