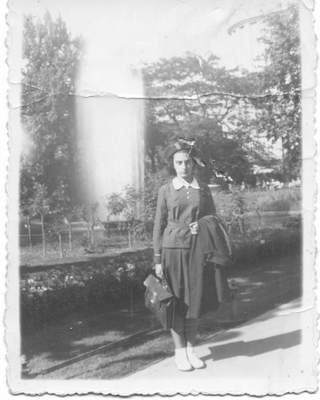 "My father was a military man during the WW I and a hero and while the radio said those were maneuvers, he said, 'Oh no, those are German planes and the war is––it's outbreak of war.' We had mobilization few days before. And around the 20th of August, my mother came back from the mountains and did not allow me to go visit my friend to her estate in Silesia, which is further west from Kraków, because she said, 'On the boundary there are German soldiers with swastikas all over. The war is impending.'

"I remember out of the corner of my eye to see a plane diving in and I heard the shots. At the time, the biggest fear was that of the poisonous gas, which in retrospect seems absolutely ludicrous.

"We left Kraków three days later, with my parents, my father's two sisters and my uncles. My mother's sister and another aunt left few days before that to the center of Poland, which they thought would be safer.

"We had knapsacks. We closed the doors. My father said, 'We will take the silver.' So we took the silver. I had a sense of adventure. I was 14-and-a-half years old…"

I do not know how my father remembered that day. He was in Mexico, unable to communicate with his parents and younger brother, who were in Lwów, Poland.