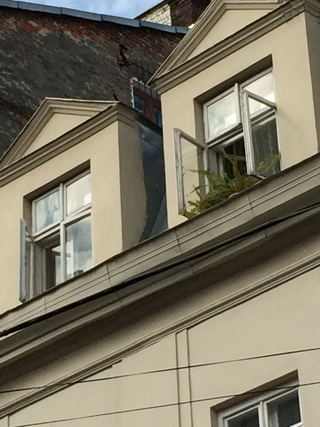 Between the gabled windows you can see the grid-covered attic window of my grandfather's house. He hid in the attic during part of WWII. Lviv, Ukraine.

The health consequences to detainees held in facilities near the southern border are horrific, with the most helpless innocents suffering terribly. Confined refugee children in Texas are in such unsanitary conditions that they have developed scabies, shingles, and chickenpox. The overcrowding is so great that they take turns standing for hours so that others can sleep.

My grandfather, Ojzer Fränkel, hid in his tiny attic with 11 other Jewish men during World War II. For almost a year, they slept in shifts, half standing while the others slumbered, but they were grown men with stamina who had learned patience. They chose confinement, having decided that it was the best way to wait out and perhaps survive persecution.

In response to reports of appalling conditions in detention centers, Trump had the gall to tweet that detainees are living better in Border Patrol facilities than they would in their home countries. How would Trump feel if his son Barron got chickenpox while being held in an overcrowded, filthy pen unable to lie down?

If this administration really wanted to deter desperate people from massing at our borders, it would have invested our tax dollars in aid to the countries those people are fleeing. Instead, Trump and his cronies are using the plights of asylum-seekers to line their pockets. These corporatists implement policies to create markets for the companies in which they have, or plan to take, an interest. Then they see to it that those companies get lucrative government contracts. When these officials leave government, they cash in. Look at John Kelly. When he was Head of the Department of Homeland Security, he oversaw the implementation of Trump's vicious immigration policies. Now the former White House Chief of Staff is a board member of the largest U.S. shelter for unaccompanied migrant children. He has to take his cut––on the backs of babes.

Why are there outbreaks of disease? Why are these camps overcrowded? Why are there no beds and not enough soap and toothbrushes? For-profit companies are not motivated to spend money to properly care for detainees. Bottom-line oriented, they skimp to please their investors. You know, it's just business. They don't care that medical neglect or mistreatment can have lifelong, ruinous consequences for detainees.

Here's another personal example. My mother, Irene Goldberger, fell ill when she was working as a slave laborer for the Siemens Corporation in Germany during World War II. She developed a sore throat and saw a village doctor who prescribed medication and rest. But the Siemens factory doctor disagreed with the diagnosis; during his cursory "examination" he found her temperature normal. Well, of course. The medication had by then lowered her temperature. But Siemens had to get the most out of its slaves, so the doctor confiscated my mother's medication and ordered her back to work. She toiled with a fever in that factory for nine months.

After Liberation, a U.S. Army doctor treated her with the then-new drug penicillin. He said she had had strep throat that had turned into rheumatic fever. He was concerned that left untreated for so long, the fever had damaged her heart valves. In fact, that's precisely what happened. Years later, when my mother was treated for breast cancer, chemotherapy had to be cut short because of her weakened heart.

This administration, while enriching itself, is using our tax dollars to trample human rights. Furthermore, it is creating a large population with good reason to retaliate for being mistreated. In their avarice and quest for instant gratification, those in power ignore the long-term consequences to our country. Perhaps those responsible will face trials for crimes against humanity, as did the Nazis in Nuremberg.