Yom HaShoah 2019 WeAre1: A Family of the Bereaved 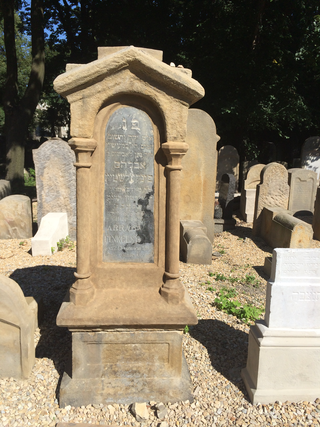 Monument of Abraham Finkelstein, my great-great-grandfather, in the New Jewish Cemetary, Krakow.

Last weekend, my husband and I attended a concert at Lincoln Center. The program included the American premiere of a symphony by Austrian composer Thomas Larcher called Kenotaph. The title is the German word for cenotaph, he explained, an "empty grave" commemorating "people who disappeared." In his work he honored the tens of thousands of refugees who have drowned in the Mediterranean since the early 2000s, "while Europe did nothing." Other Austrians debated immigration, but Larcher felt terrible about the refugee crisis and also powerless. Kenotaphis is his response.

On this Yom HaShoah, Holocaust Remembrance Day 2019, it is heartening to contemplate an Austrian's empathy and desire to do something on behalf of refugees.

I think of my great-great grandfather Abraham Finkelstein (1824 – 1899) and his wife Laja, who were buried in the New Jewish Cemetery in Kazimierz, the old Jewish section of Kraków. I visited the New Jewish Cemetery during my 2016 trip to Vienna, Kraków, and Lwów to do research for HOW FAR https://www.authorsguild.net/services/sbx/sites/karen73/pages/1021/edit. With the help of the cemetary attendant, we found Abraham's monument in the third row from the front, but Laja's monument was missing. My husband and I placed stones on Abraham's monument. I cannot say I visited his grave, though, because when the Nazis occupied Kraków, they vandalized the cemetery. They collected flat gravestones to pave streets and threw larger monuments, including Abraham's, into a pile. Then they used the cemetery as a shooting range where they held regular target practice.

It is now the task of the attendant to try to match these monuments to the burial plots according to a registry and map of the cemetery. My ancestor's remains continue to lie separate from his monument, lost as they turn to dust.

And yet, Abraham Finkelstein was lucky. The location of the remains of his granddaughter, my maternal grandmother, Teofila Finkelstein Goldberger, were never known. All we know is that despite having bought false papers and posing as a Catholic, in July 1943 while walking on a street in Lwów she was denounced to be a Jew. Murdered. A person who disappeared. Nor do we know much of the fate of her husband, my maternal grandfather Isidor Goldberger. A friend told my mother that Isidor jumped from a train bound for concentration camp, also in July 1943. My paternal grandmother, Mechla Frankel, swallowed cyanide when the Gestapo came for her. I don't know the year.

There are not even cenotaphs for my three grandparents.

But my paternal grandfather rests here in New York. I'll tell you about his escape to freedom another time.

HOW FAR: A Love Story Against All the Odds

WeAre1: A Family of the Displaced

In September 1942, my mother volunteered to go to Germany as a slave laborer. She had false papers, which enabled her to impersonate a Catholic Pole. About 12 million Eastern Europeans worked as forced laborers for the Third Reich, which was desperately short of workers with so many men at the Russian Front. Most workers were captured and forced to work. Many were POWs. Conditions were so bad in the occupied lands that civilians (1.3 - 2.6 million) volunteered in order not to starve. According to one paper I read, "It was a policy of extermination through hard labor of people deemed fit only to work. The Nazis envisioned a slaveholder society after their expected victory." The Reich assigned workers to corporations (some even were German subsidiaries of American companies), small businesses, and farms. Very few Jews masquerading as Catholics in Germany survived this way. My guess is about a 250.

Seventy-four years ago this month, GIs liberated my mother. She had toiled first on a farm, then in a produce nursery, and later in a Siemens small appliances factory. The last two were in the stunning resort village of Bad Neustadt-an-der-Saale, Bavaria, known for its therapeutic baths. Here is an excerpt, based on my mother's testimonry, describing her liberation the day after Passover ended.

On April 6, 1945, as American troops approached Bad Neustadt, Radio London issued instructions for German civilians to avoid railroad stations because they would be bombed. But the Siemens factory was next to the railroad and bomb shelters were reserved only for Germans. Irena and her friend the French POW ran to the nearest one, banged on the door, and beseeched those inside to let them in. No one heeded their cries for help. Not knowing where else to go, they returned to the factory. Shells screamed and exploded outside. A devastating hit smashed off a corner of the building, leaving an open hole. Clearly it had become too dangerous to stay.

They ran along Redestraße toward the village, thought better of that and turned toward Bad Neuhaus. They had the peculiar idea that the castle, built with thick, medieval walls, might protect them. Getting there, however, meant crossing the railroad tracks. They picked their way over the rails, forded the tiny Franconia Saale River, and climbed the hill to the ruins. It was a steep hike, if you were running from the northwest to save yourself.

Just above, they heard the roar of two warplanes waging a mighty dogfight. The aircraft swooped and dove murderously, shot and ducked as they fired at one another. Irena pressed herself against the cool gray sandstone of the castle wall. While the planes seemed to glower at one another and the pilots readied themselves for another joust, Irena and her friend ran to the arched main gate for cover. The din of the two swarming fighters, a long series of shots––and then one plane pitched and yawed violently. Something was wrong with its wing. Was it the American plane? Or had the Yankee pilot outwitted the Nazi? As the plane tumbled to Earth, they saw the unmistakable iron cross insignia on its wings.

Irena and the French POW cheered and applauded. Then they turned toward the village to see American tanks rolling into the Market Plaz. Fleeing German soldiers crossed the river and bombed the bridges as they retreated. Irena and the French POW watched in stunned silence. There they stood on the precipice of freedom, the moment of liberation imminent, yet they could not quite believe it.

The battle for Bad Neustadt lasted the rest of the day and into the next morning. When Irena and her friend returned to the village, they again tried unsuccessfully to get into a shelter. Irena saw many wounded American and German soldiers strewn about the streets of the luxury resort. For the first time, she beheld a dead man lying in a pool of blood.

Late in the afternoon, Irena was walking back to Siemens along Redestraße with her friend Stasza when they came upon American troops of the Ninth Air Defense command camping along the roadside. Two soldiers approached and tried to engage them in conversation in broken German. One tall, blond G.I. seemed to be extending an invitation, but he so garbled it that his companion lost patience.

"If you can't do any better than that, Floyd, "Nogi z dupy powyrywam (I'll pull your legs out of your ass)," he said partly in Polish.

Irena and Stasza broke into peals of laughter. The soldiers did double takes.

The G.I.s were astonished when Irena and Stasza explained that they were Polish slave laborers working for the German state. Stanley and Floyd invited the girls to join them for a delicious meal. Then they apologized for it.

"Look at the sloppiness," said Stanley, as they sat outside the mess tent. "Can you believe it? Serving pot roast with peaches."

Irena did not think this was a quip. As she ate and savored the bountiful meal, it was her turn to be surprised. This was the third invasion she had experienced. First, the swift, brutal one of the Germans. Then the Soviets, who were quiet, well-informed and who spoke the languages of the people they conquered. These liberators, long-legged Pennsylvania troops of Polish descent, were completely unaware of the hardship and starvation throughout Europe.

Interesting especially since I knew your mom. Thanks

Thanks, George. I remember your parents well. Am I correct that your mother volunteered to work as a typist in one of the camps, even though she did not know how to type? Which camp was it?

Very moving and compelling narrative - appreciate your passion for us to know your/our history. How Far is an inspiring story of survival in fascist times - so many lessons for us today.

Great writing and moving account of the American liberation of a Bavarian town. You really bring the experience of your mother to life.